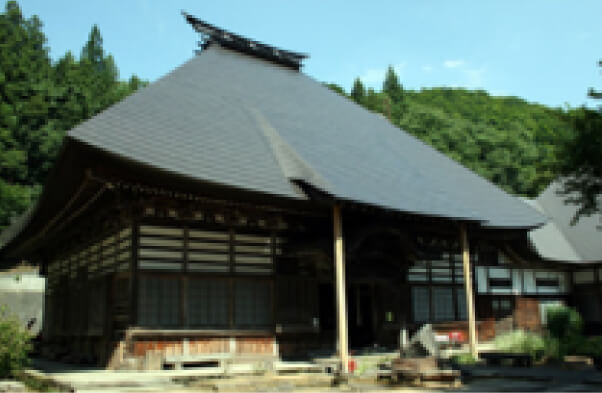 Climbing the steep stone stairs leading to the temple grounds will take your breath away, as will this mystical and picturesque building, which is surrounded by towering conifers. This ancient temple of the Soto School of Zen Buddhism, founded more than four centuries ago, is said to be the place of origin of the locally grown leaf vegetable Nozawana. Nozawana pickles, beloved for their slightly salty taste and crunchy texture, are rich in vitamin C. In 1756, the eighth head priest of Kenmeiji temple returned from Kyoto with Tennoji Kabura (a type of turnip) seeds. When the seeds were planted in Nozawa Onsen, they sprouted much bigger leaves and stems than their original variety did. Within the temple grounds there are still Nozawana fields left, and teradane (temple seeds) can be purchased as well. 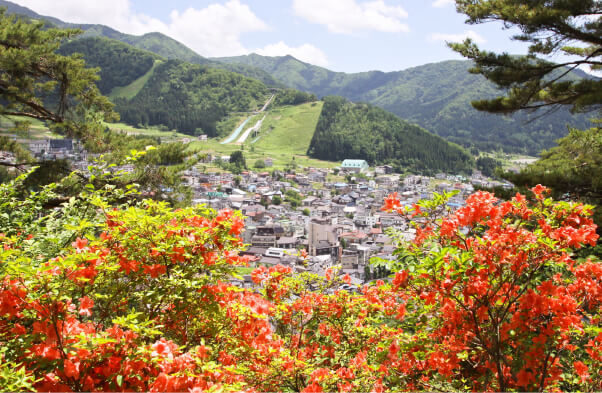 In the north of Nozawa Onsen, you’ll find the picturesque Tsutsujiyama hill, an especially captivating sight in June when it’s in bloom with around 5,000 azaleas that color the slopes bright red. From the park at the top of the hill, which is also home to the tiny Hyakuban (100) Kannondo temple, you have great views of the village, the ski area, the Northern Alps, and the five peaks of the Hokushin Gogaku mountain range. The outlook is a 25-minute walk up a narrow, winding path lined with 100 Kannon monuments. Kannon is Avalokiteshvara, the bodhisattva of compassion, and these 100 Kannon statues are used by the locals in ceremonies to pray for their ancestors and for people’s safety. The Kannon lend a spiritual ambience to a short nature trail surrounded by lush greenery: the perfect getaway to refresh your mind.
Walking along this winding path lined with Kannon monuments is considered to be the equivalent of visiting the trio of pilgrimage tracks that make up “Japan’s 100 Kannon”—the Saigoku 33 Kannon in the Kansai area, the Bando 33 Kannon in the Kanto area, and the Chichibu 34 Kannon in Saitama prefecture. That’s because legend has it that the Kannon monuments, built by villagers between 1839 and 1849, are placed on soil that was brought back from these three sacred pilgrimages. 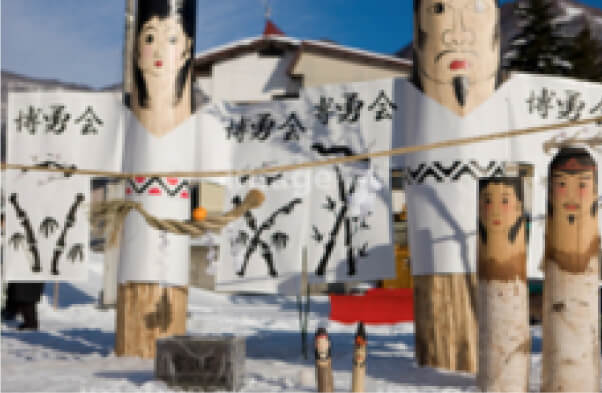 Dosojin is a guardian deity in Shinto, and usually to be found near roads, village boundaries, and mountain passes, protecting travelers and towns from harm. Generally, it’s a human-like figure carved into small stones, but Nozawa Onsen has its own interpretation of Dosojin. It comes in pairs, hand-carved from two matching cylindrical pieces of wood, and painted to resemble a married couple; local custom celebrates them as the deity of fertility, happy marriages, and healthy children. Legend has it that the couple the figures are based on were not particularly attractive, but decided to get married and were blessed with a baby boy. Walking through Nozawa Onsen, you can’t miss these adorable wooden Dosojin, which come in a variety of sizes and designs. Locals often have small versions of these figures enshrined at home, but sometimes you can spot them outside their front doors. During the annual Dosojin Fire Festival, which takes place on January 15th, people bring their Dosojin in pairs to the festival site, place them in a big basket, and pick up somebody else’s set to take home with them in the morning. The idea is that the adopted figurines will then help their new owners find a partner for life. If you need some friendly assistance in that area, you can pick up your own Dosojin set at the many souvenir shops sprinkled around town. 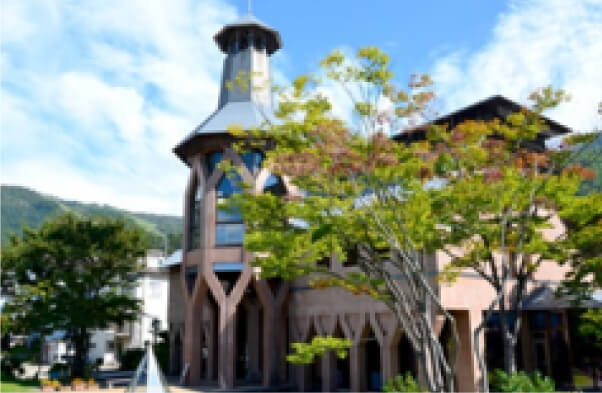 The Oborozukiyo no Yakata Museum is dedicated to Tatsuyuki Takano (1876–1947), a popular Japanese lyricist and literature scholar, who was active during the first half of the twentieth century. He composed the lyrics for several children’s song books used in elementary schools across the country, which popularized songs that have been passed down through generations and are still firm favorites for Japanese parents and children alike. The first floor of the museum houses the Tatsuyuki Takano Memorial Hall, a permanent exhibition showcasing a large number of his works, such as writings, diaries, and letters, as well as other personal items alongside a life-size diorama of his office. Takano had a special relationship with Nozawa Onsen, having spent about twelve years living in the little onsen town. From 1934 onward he stayed each year at his summer residence, Taiun Sanso, near Ogama, before moving to Nozawa Onsen year round in 1943. While making your way to the second floor, which hosts regular changing exhibitions, keep an eye out for the large window in the hallway with elaborate colored glass, depicting fields of the town’s popular leaf vegetable Nozawana. On the third floor you’ll find a replica of one of the giant, colorful lanterns used during the annual Dosojin Fire Festival. Pick up a souvenir in the shop on the first floor, and for refreshments head to the adjoining café. 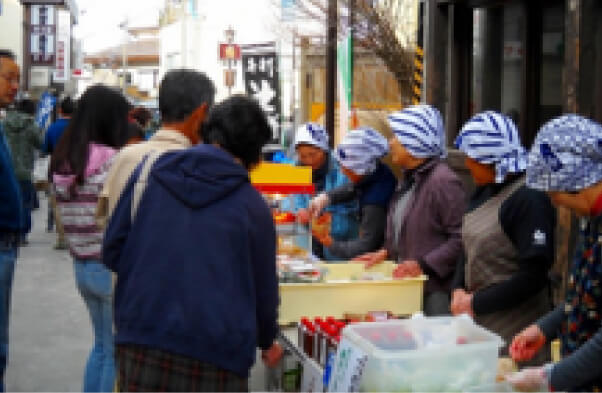 If you are visiting Nozawa Onsen between May and October, make sure you don’t miss out on the town’s weekly morning market—though you’ll have to get up early, as it’s held every Sunday from 6 am to 7.30 am. Super-early risers should bear in mind that all thirteen public onsen facilities open at 5 am, so your market visit could easily turn into a pleasant morning stroll following a dip in the hot spring. The market is on the town’s main drag of Oyu-dori, and offers local and seasonal produce—grapes and apples from surrounding orchards in late summer, mountain vegetables during spring, mushrooms in autumn. Look out for Nozawa Onsen’s specialty, Nozawana (Japanese leaf vegetable) pickles, which are in high demand among locals and tourists alike. The farmers market also sells Akebi vine crafts, folk toys, woodwork, souvenirs, homemade jam and more. A handful of food stalls provide culinary specialties, including onsen manju (buns filled with red bean paste), Nozawana croquettes, sasa zushi (sushi spread out on a bamboo leaf), and healthy smoothies. Be warned: it’ll be hard to resist grabbing a snack while exploring the market stalls. 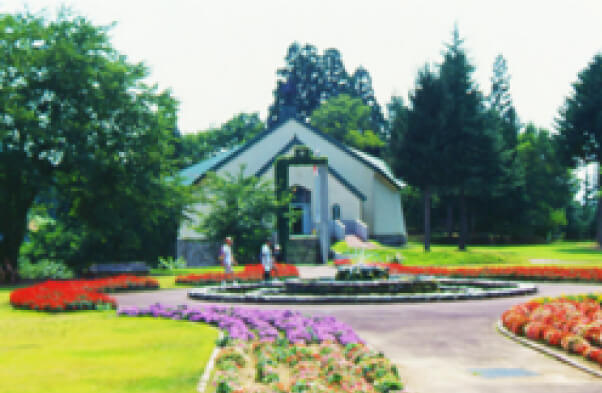 A trip to the Japan Ski Museum, with its church-like design surrounded by typical European mountain lodges, is like stepping into an Austrian village. Once inside you can gaze at ancient skiing equipment from various parts of Asia, learn about the development and changing fashions of skiing, pore over historical documents and see plenty of memorabilia such as posters and medals won by local stars of bygone Winter Olympics. Even a pair of skis once owned by Imperial Prince Takamatsu are on display. For ski enthusiasts, the Japan Ski Museum offers unparalleled insight into the history of the sport—from its introduction to Japan in 1911 (when it was brought to Nagano’s neighboring prefecture Niigata by a former Austro-Hungarian army officer), through the adoption of the classic Arlberg skiing technique two decades later, to its development as a modern, elegant sport. And Nozawa Onsen has a special place in that history: in 1930 the Austrian creator of the Arlberg technique, Hannes Schneider, was invited to Japan by the Imperial Prince Yasuhito to explain the new style he had been popularizing across the world. Schneider held a demonstration of his method at Nozawa Onsen in front of hundreds of Japanese skiers—a moment that would become a major milestone in the development of professional Alpine skiing in Japan. 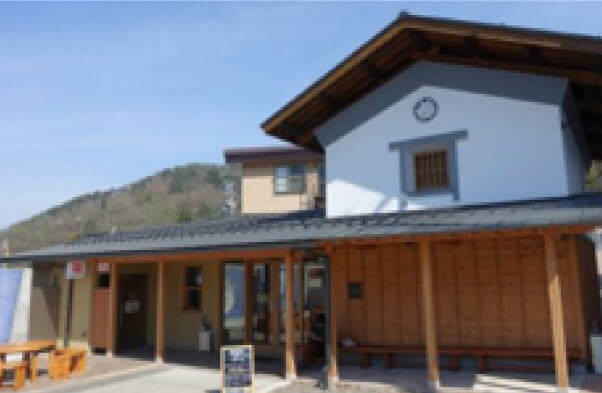 Schneider Square, named in honor of Hannes Schneider, and the café and art gallery L’atelier Kura form by far the best introduction to the village; both are centrally located near Nozawa Onsen’s tourist information office and bus terminal. In Schneider Square you’ll find a large monument commemorating two personalities who contributed to the town’s growth and reputation: the blue tile-covered wall features a pair of wooden skis and poles, as well as a bronze bust of Hannes Schneider, while the large, round sculpture next to them—which resembles an Olympic medal—was designed by the late Taro Okamoto, the famous avant-garde artist who was a regular visitor to Nozawa Onsen. Nearby L’atelier Kura, meanwhile, is another local institution, which occupies an old, renovated warehouse (kura in Japanese) and renowned for its homemade bread specialties. Don’t leave without tasting their “Nozawana Mayopan,” a sandwich filled with a paste made from pickled local vegetable leaf Nozawana and mayonnaise. It’s not the only masterpiece on offer, though. Head up to the second floor and you’ll find a free art gallery. 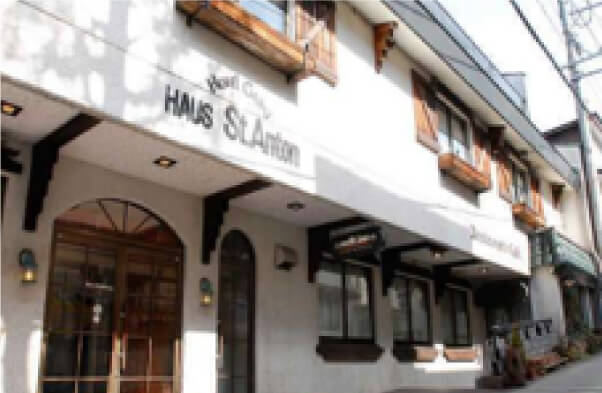 Strolling down Oyu-dori, Nozawa Onsen’s central shopping street, you can’t miss Haus St Anton. Incorporating a hotel, jam factory, restaurant, and café, its architectural design resembles typical structures found in Austrian villages—hence the name (St Anton is the village in Austria that Hannes Schneider hailed from, and is a sister city to Nozawa Onsen). All thirteen hotel rooms feature distinctive interiors, combining a cozy ambience with a modern style, similar to European mountain lodges. Even if you’re not a guest at Haus St Anton, it’s well worth dining in its restaurant. Here, Kensaku Katagiri, a former ski champion and trainee at Ritz-Carlton Osaka’s La Baie restaurant, turns fresh, local produce and carefully selected international ingredients into creative dishes based on French cuisine and combined with Japanese traditional cooking techniques. Order an osusume (chef’s recommendation) course, and savor Nozawa Onsen’s nostalgic charm fused with the modern vibes of urban Japan. The jam factory, meanwhile, with its cozy café space, is the perfect place to take an indulgent moment for yourself. If you’re craving a snack, go for Nagano’s specialty, oyaki buns. Made from fermented flour dough, Nozawa Onsen’s version is filled with a juicy mix of vegetables including local favorite leaf vegetable Nozawana. They also have different types of bread, ice cream made from local fruits, and plenty of coffee options. Don’t hold back when it comes to sampling all the delicious, additive-free homemade jams and seasonal juices on offer at the tasting table. They make perfect souvenirs or gifts for loved ones back home—if they make it that far. 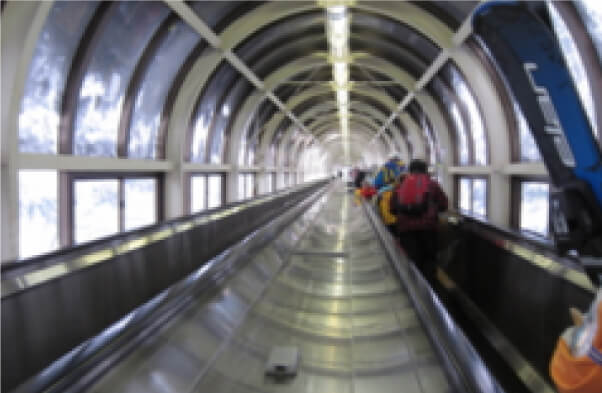 This futuristic moving walkway connects the hot springs of Nozawa Onsen with the ski resort’s Hikage Base. Entering the tube-shaped design, built in 1994, is a little like stepping inside a particle accelerator, though it will move you along at a much more comfortable speed. It’s an elegant way to start your winter-sports adventure, and in contrast to the ski lifts, the Yu Road is free of charge, and offers some unique photo opportunities. 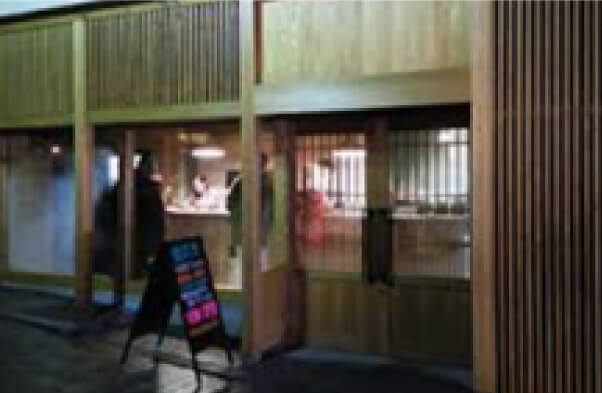 For many, a good craft beer is the perfect follow-up to a soak in a hot spring. With the Oyu bath house right across the street, this brewpub has cornered the market in post-onsen pints. Run by an English-Japanese couple, Microbrewery Libushi’s taproom provides space for twenty hop-happy individuals and as a small standing bar, it’s a great place to mingle with other tourists and locals. The brewery uses natural local spring water, as well as the finest local and international organic ingredients to create their unique brews—the staff are known for experimenting with different yeast strains to come up with new concoctions on a regular basis. You’re best off with their beer tasting set, which lets you choose four samples from the extensive menu. Pair your pints with some snacks, while any non-drinkers can look forward to homemade juices made by Haus St Anton from local produce.