There are various stories explaining how the gensen was discovered. Some say that it was discovered by a group of ascetics called Yamabushi who were training themselves by roaming single-mindedly deep in the mountains, while others claim it was found by a hunter who followed an injured bear that happened to lead him there. There are many other legends too, so people must have known about the hot springs around Nozawa since quite a long time ago.

Time passed since then, and present-day Nozawa-onsen is a popular hot-spring health resort thanks to efforts in environmental improvement and other areas.

In the village’s Onsen district there are thirteen atmospheric public bathhouses called “SOTOYU” and visitors can sample several of them on a relaxing onsen pilgrimage. 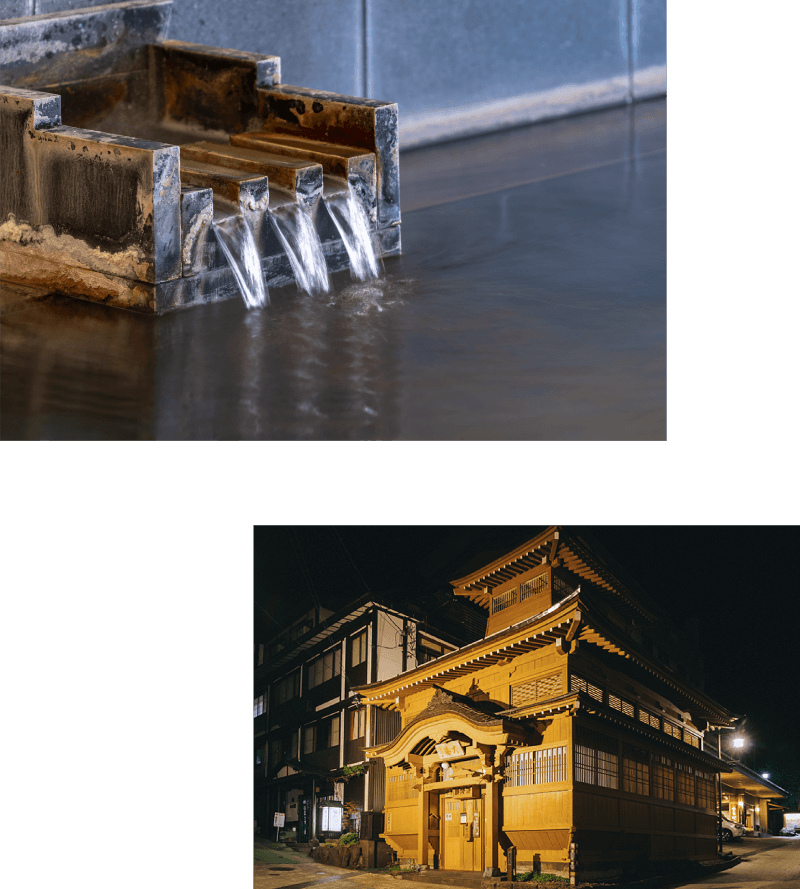 One of Nozawa Onsen’s must-see spots is Ogama, the village’s charming communal open-air kitchen, which is named after the hottest spring among the thirty sources of Nozawa Onsen and located on top of a slope. Villagers use Ogama’s five pools, through which 90-degrees Celsius steaming-hot mineral water endlessly flows, for washing and boiling vegetables and eggs. And you can see why they continue to flock to this community hub—the mineral-rich hot spring water gives the food its extraordinary, delicious taste, especially the area’s signature leaf vegetable Nozawana. But don’t start dreaming up your own onsen-enhanced culinary creations just yet. Since access to Ogama is restricted to community members, and also for safety reasons, visitors are not allowed to go near the pools, but you can still observe the spectacle from a close-enough distance—with the best views in the morning. And there’s no need to miss out on the food. To get a taste of legendary onsen eggs, walk down the alleyway that connects Ogama with Yurari, a terrace-like open space, housing one of the public foot-baths as well as a tub for boiling prepurchased eggs (available at one of the souvenir shops along the alleyway). The eggs may need about twenty minutes until they are ready to eat, but a relaxing foot-bath combined with a superb view of Nozawa Onsen definitely makes it worth the wait. 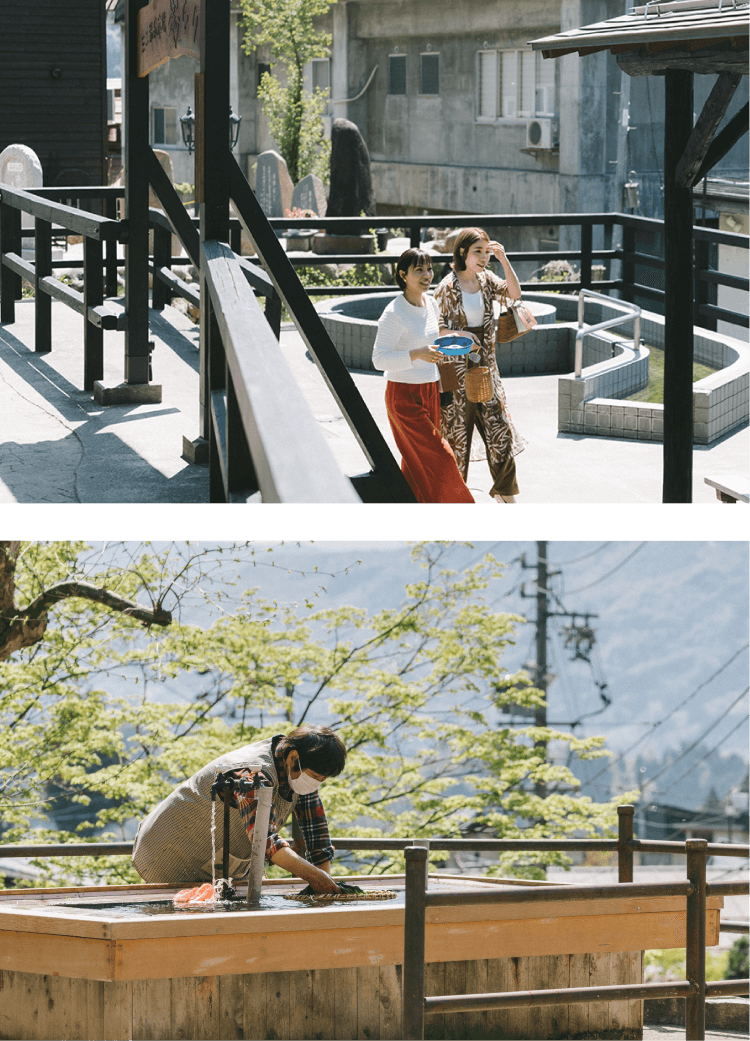 An egg’s yolk solidifies at about 65 degrees Celsius, and the white solidifies at about 70 degrees. Onsen-tamago is a special type of boiled egg made by utilizing these facts—originally by putting raw eggs into hot water of 65 to 68 degrees.
Onsen-tamago is a boiled chicken egg, in which the yolk is half-boiled, while the white is slightly solidified.
Onsen-tamago is made by utilizing the difference between the temperatures at which an egg’s yolk and its white solidify.
When eggs are boiled, the white starts to solidify at 58 to 80 degrees Celsius, solidifying completely when the temperature reaches 80 degrees or more. On the other hand, the yolk solidifies at 64 to 70 degrees Celsius.
If an egg is boiled at about 70 degrees Celsius, only the yolk solidifies, while the white does not—thus resulting in onsen-tamago.
n contrast to ordinary soft-boiled eggs, onsen-tamago is characterized by the condition that the white is softer than the yolk.
If the temperature of the hot spring water is close to this range, eggs can be easily boiled by immersing them in this hot water. Japanese style hotels operating at hot spring resorts have often served this type of boiled egg, and this is probably why those boiled eggs are called “onsen-tamago.”
Onsen-tamago is usually served with the shell removed, in a small cup with a special sauce of broth and soya.
Boiled at a low temperature, onsen tamago have a sterilizing enzyme inside them called “lysozyme,” which is still active as it is in raw eggs. With no risk of food poisoning because it is sterilized, onsen-tamago is perfect nutritional food and is considered to keep well. 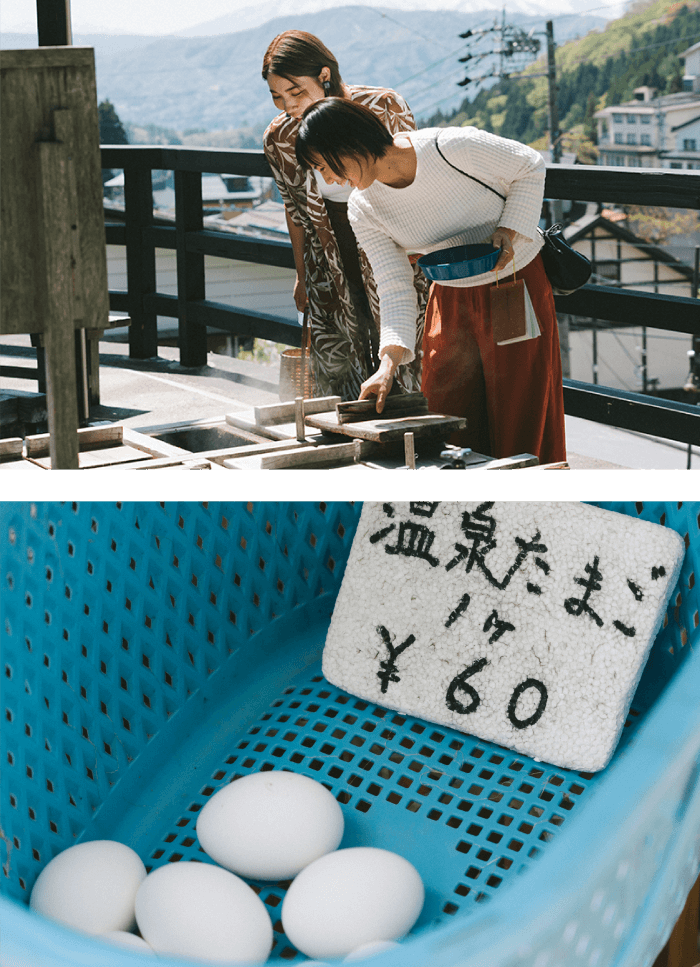 Why don’t you come to onsen district and try making onsen-tamago yourself?

A little information about onsen

The best way to enjoy an onsen is by soaking in the hot water in a relaxed manner without thinking about anything.
But the more you know about onsen, the more ways you can discover to enjoy them. Let’s learn a little about onsen here so we can fully enjoy them.

Nagano prefecture is an “Onsen Kingdom”?

Nagano Prefecture—formerly called Shinshu—is one of the most famous “Onsen Kingdoms” in Japan, with 236 onsen (2nd in Japan), 1,043 gensen (6th), and hot spring water flowing at 133,787 liters per minute (5th). Rich in a variety of hot spring qualities, eleven typical types of spring can be found in this prefecture.

What advantages or positive effects can be expected from onsen?

How is the hot spring water drawn to each bathhouse?

What is the etiquette for taking a communal bath in Japan?